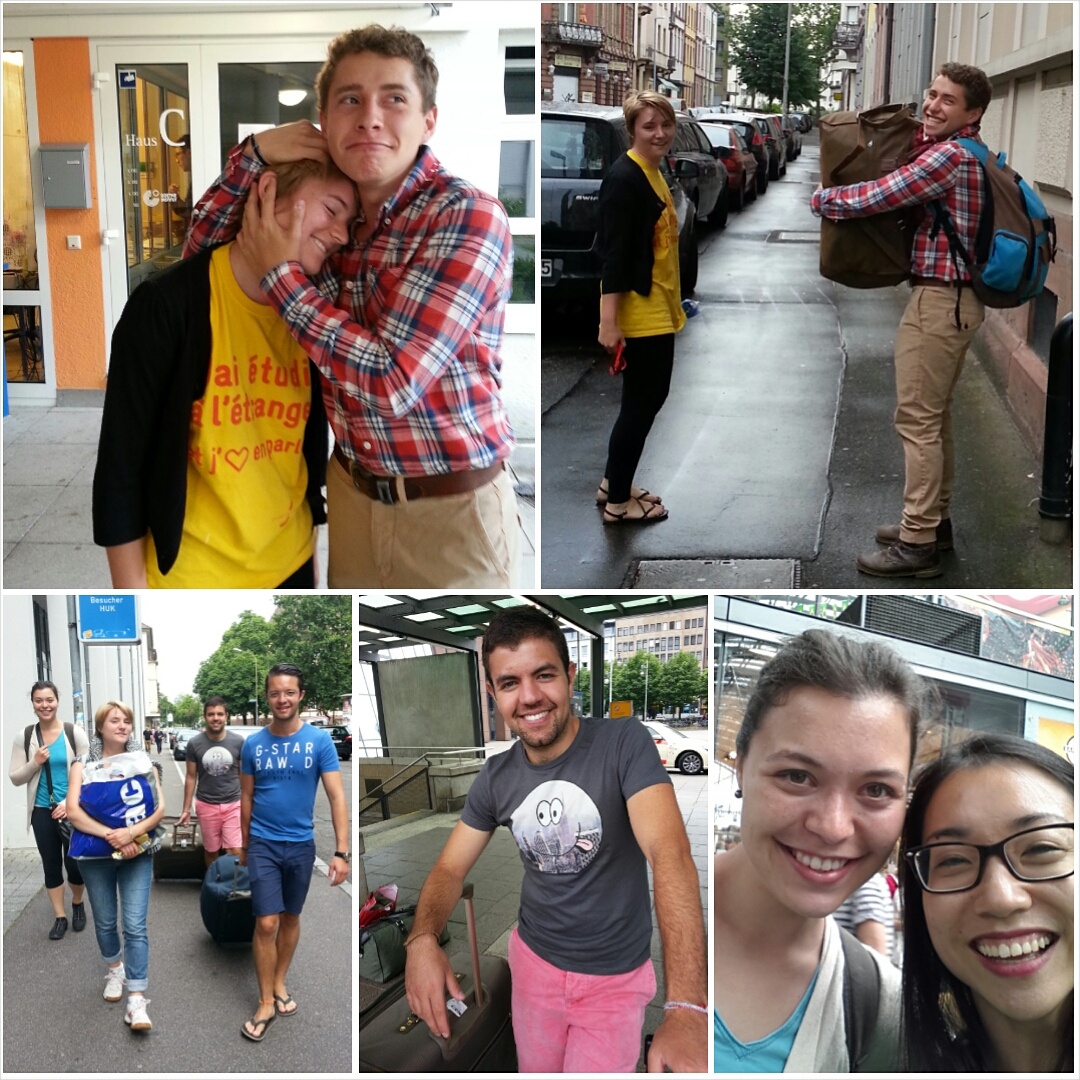 After a near flawless run of sunshine and blue skies, today we woke to the sound of light pattering rain, and Gabo whispered poetically: “Germany’s saying goodbye to us with soft, sweet rain”. We all nodded solemnly and peered out the window.

He was the first of us to leave for the morning, needing to catch his train to Frankfurt Airport before flying back home to Mexico. It had been a late one last night, and he’d frowned a little as we had made our way home: “I have to wake up in like five hours to catch the train!”.

Celine and I both set our alarms for 7 am, which is when he said he’d be exiting the Gästehaus forever, and we both got up and helped him to the station: Celine in her I’m-wearing-my-pyjamas-but-hopefully-it-doesn’t-look-like-it outfit; both of us, with rank breath because we hadn’t had a chance to brush our teeth. I put my songs on and we ambled to the station- Gabo carrying the lion’s share of his stuff (including a trunk full of German books to improve his already awesome German), and me pulling his mini-suitcase along. The rain was still spitting and it was a bit chilly, but we sang along and grinned.

When we got to the station, Gabo kept peering at the board. He was in “transport connection concentration mode” and with the sometimes confusing train boards which don’t always include all of the train stops, he was on high alert.His train was due to arrive at 7:55 am, and as the minutes ticked by, Celine and I were distracted by these cute dogs, the music we still had on, and our dance moves.

Unfortunately, this meant that when a train pulled up at 7:50 am, we were still high on dog cuteness and life in general, and genuinely (giddily) convinced that it was Gabo’s train. We ushered him on with big hugs and a huge farewell dance which included a lot of 70’s air pointing and hula- hoop hip jiggles. And for whatever reason, in a moment of clarity (call it intuition), Celine cocked her head to the side and asked: “Umm, do you guys think this is the right train?”

We looked up at the board. It definitely made mention of Frankfurt, and Gabo and I parroted back: “Yeah it is, these trains come early and wait around until their designated leave time”. In all honesty, they do– generally they do. So, Celine shrugged and we pushed Gabo’s suitcase up the stairs and onto the train. We danced to the music, waving like lunatics while Gabo waved back with a big smile. The doors slid shut and the last we saw of Gabo was him conferring with a train ticket checking man.

As the train pulled away, Celine and I stood there talking for a few minutes before starting the long walk back up the platform– then, a train came. It was 7:55 am. We both thought the same thing. Gabo’s train was meant to come at 7:55 am. We looked horrified at each other, and we just knew: we had put Gabo on the wrong train.

Celine stood with her mouth hanging open: “Omg, did we–? Did we just–??”

She didn’t even have to finish the question. I nodded with my eyes wide open, and we were both crushed into deafening silence. There was nothing we could do. Poor old Gabo, on the wrong, frikking express train– an ICE train that only stops twice!– all because of us.

We walked back to the Gastehaus and convinced ourselves: “He has plenty of time– we made him get the earlier one just to be safe”, and laughed nervously. Then we crossed our fingers and toes and asked the Transport Gods to help Gabo out and throw him a penalty-free pass– the wrong ticket normally attracted a hefty penalty and we were really worried. “Sheisse!!! Why would they have a train five minutes later?!!” we kept saying over and over.

After we got back, we threw a final “God speed!” into the wind in Gabo’s direction before hurling ourselves into the clean-up process. We needed to be out of our rooms by 10 am, and everyone needed to pack, strip their beds, empty their fridges, chuck out junk and be ready for inspection to get their deposits back.

As Stefan helped me down with my suitcase, I saw Celine tapping her foot as she waited: “Where’s Jorge and Ernesto?” she asked. Last night, they’d pretty much vowed, with their hands on their respective hearts, to help me and Celine to the bus and train station.

They’re muscly and strong, and just as Jorge had run up the Gästehaus stairs with my suitcase on day 1 (when I didn’t yet know him, but he knew enough about a struggling weakling when he saw one to give me some heroic help), he had agreed with his best mate, Ernesto, to see us off and help us cart our stuff up the hill and up the stairs of the station.

We waited until 10:15 am, five minutes after we were due to meet. Celine frowned, I texted Jeremy: “What’s Jorge’s room number?!”, Jeremy didn’t know and was all the way in Switzerland and couldn’t really help anyway, some guy chewed on a piece of gum, squinted at the sky, scratched his armpit and said “Don’t quote me on this, but I think someone said Jorge had already left!” and we sighed: “They wouldn’t just leave without saying goodbye”, explained Celine– and she was right.

In the dying seconds, just as we had started our walk to the station with Aubrey joining the departure party, around the corner came Jorge and Ernesto. They looked really happy and pleased with themselves (I still don’t know where they went or why), and we warbled after their whereabouts and told them off a few times. They just laughed and took over our stuff.

It was a sad, sad juncture, as Celine eventually went one way for the bus, and Aubrey and I went the other way for the train, and we hugged and promised that we would visit each other in Australia and Glasgow or Strasbourg. Celine’s a bundle of hectic, fun, exuberant energy, and I am gonna mega miss her spontaneous fun and gigantic, chakra-aligned hugs.

Ernesto came with us and heaved both Aubrey and my suitcases up the steps, taught me some cool Spanish words, threw us a big relaxed grin the way only Ernesto can, and then, like the Luggage Lord Superhero, was gone.

When we got to Frankfurt, Aubrey and I sat in Frankfurt Hauptbahnhof and scoffed down a bagel and some amazing frozen yoghurt. She looked at her watch: her train was due to come in ten minutes. I pulled a five year old sad face– suddenly, all this farewelling just got real, and with one final picture and her big, sweet smile, she was the last person I saw from school before I left Deutschland.